Hey there, my name is Kazakuri and I’m an anime fan born in Canada! Back in February 2019, I discovered that one of my favourite English speaking artists was accepting commissions. I had never really been interested in commissioning art before then, but I had suddenly had a strong desire to commission an image from them. I figured that I’d finally have something that could represent me across various social media sites. A few short weeks after working up the courage to send them a DM, I had an adorable picture of Tenka Adachi from Shoujo Ramune to use across the web. It was love at first sight with that image, and I always went back to stare at it multiple times a day. In fact, I simplified the image and put it on a pair of shoes because I loved it so much. 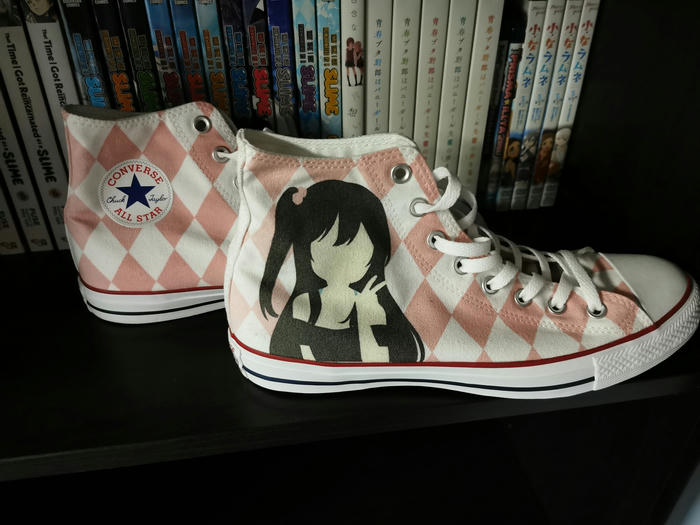 Later on that year, I commissioned several pieces of art of Shana from Shakugan no Shana. I host a link shortener based on her famous catchphrase, and I wanted to customize the site with some artwork that I had the rights to use. After those commissions, I figured that those would be more than enough for my needs and I wouldn’t need to spend any more money on commissioned art. But a month before Christmas I thought it’d be better to commission a custom Christmas-themed avatar, rather than Photoshopping a Santa hat onto my previous commission.

Right around that time, I discovered Skeb, a Japanese art commission site that is marketed as a simple way to request art from your favourite creators. Compared to similar options that exist in the west, that certainly appeared to be the case. All my favourite artists on Pixiv seemed intimidating and completely out of reach, especially as a foreigner, and yet Skeb was offering a way to send requests to them. I stumbled upon the profile of one of my all-time favourite artists, Bonyuu Cheese no Natsu, and the experience completely sold me on Skeb. Some of my earliest memories as an anime fan include browsing their pictures on Pixiv and purchasing a physical copy of one of their doujinshi at a local anime convention.

It took me a few days to get over my anxiety and properly think of what I wanted to request from her, but I have no words to explain the overwhelming excitement I felt when she accepted my request and when she delivered the completed illustration. From there, I had fallen completely down the rabbit hole of commissioning artists. At first, most of my focus was on seeing artist’s representations of my favourite character, Tenka, but the focus began shifting towards wanting to support my favourite artists, and I sent out a few requests for characters that they like and want to draw as well.

As time went on, I continued to commission more artists and climb further up Skeb’s request master ranking, reaching the overall top 10 multiple times. I was still discovering plenty of incredible artists to support and commission, but there were always a few creators who I regretted not being able to support with requests. Since Tenka is a copyrighted character, there were understandably a handful of creators that rejected my requests. Deciding that I wanted to change that, I set forth on a journey to come up with an original character of my own that I could use to support as many artists as I could.

Since I wasn’t completely comfortable doing the entire commission process in Japanese, I originally started my search in the back half of 2020 looking for English-speaking artists. After a few failed attempts and one particularly unpleasant experience with an artist, I was on the verge of giving up. In March 2021, I ended up trying out a Japanese site that focuses on the traditional commission process, SKIMA, and had a wonderful first interaction with the artist I wanted to commission. Despite all the nerves I had going into it, I ended up with an absolutely incredible original character named Emma while meeting and getting along with another wonderful creator that I want to support even more from now on.